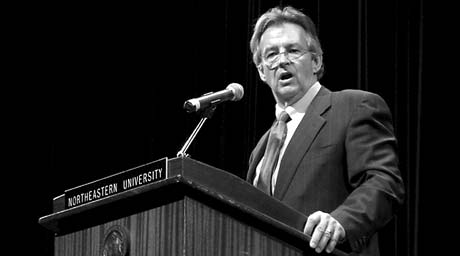 “A fast-talking, terse former negotiator, Joseph Wilson sat straight in his chair, offering no sign of fatigue from months of questioning and what he called “tawdry political tricks.”Asked about the same topic he has entertained for months – the unveiling of his wife’s once-covert spy status by syndicated columnist Robert Novak – he gave a scowl as if to rev his rhetorical engine and spit an answer with lightning pace.”What this is all about is the 16 words in the [2003] State of the Union Address, but the lackeys in the administration have managed to divert the attention from those 16 words and onto my family,” he said, taking no breaths over the course of a minute. “The real issue is the level of threat we faced from Iraq at the time we went to war. I would prefer to be in that debate, seeing as how I have something to offer. Unfortunately, most people want to know what it’s like to be Valerie Plame’s husband – which I’m also happy to talk about.”

In a talk sponsored by the Northeastern College Democrats at Blackman Auditorium Nov. 21, Wilson laid out the story of how he had gone from being a relatively anonymous state department official to “Valerie Plame’s husband,” sparing few from potent verbal attacks along the way.

Over 90 minutes, the rhetorical engine never slowed down. He was able to provide the audience with most of his career history, his position on both Iraq wars, a full account of the trip to Niger he called the reason for his character assassination and, as a “side issue,” his reaction to the outing of his wife’s identity as a spy with the CIA.

Wilson, a former ambassador to several African nations and to Baghdad during the 1991 Gulf War, described his position on the current Iraq War as a complete “180” from what he called his “hawkish” position in 1991.

“It was clear to me in 2002 that there was a group of people advocating for war who didn’t understand what would happen if we invaded [Iraq],” he said. “Those of us who had some experience could see that the risks far outweighed the positives.”

He said his experience meeting with Saddam Hussein just before the United Nations attacked Iraqi forces invading Kuwait in 1991 and helping spur democracy in Niger helped him come to the conclusion democracy was too difficult a road to pursue in Iraq.